Hi my name is Michael Currie
I grew up just outside the village of Kells and my house was literally a stone’s throw from the river. So of course spending time along the river was a big part of my growing up. I spent the majority of my childhood fishing along the Kellswater and Glenwherry. From the season started in March I would be swinging small spiders and nymphs through streams chasing the very abundant population of small trout that resided in the river.

Come July and water permitting we would start to see a few Dollaghan making an appearance, at this point I would switch my spiders for a team of traditional wets and head out either in a dropping spate or the evening coming into dark in search of something a little bigger.

I started tying flies at the age of about 14 and really enjoyed it, in fact there’s times I probably prefer it to fishing! Of all the patterns I tie I seem to enjoy tying small hair wing patterns like Silver Stoats and Executioner’s or small Irish shrimp flies.

As for my fishing, I’m every bit as happy chasing small trout in streams as heading to some of the bigger rivers in search for salmon and in recent years have been really big into the Euronymphing style. I’ve found it incredibly productive not only for trout and dollaghan but every now and again you get a nice wee surprise as you lift into a grilse and the rod bends double. 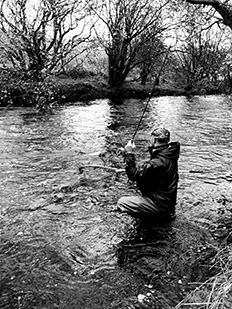 Sponsors of
The Antrim Fly Fair 2022 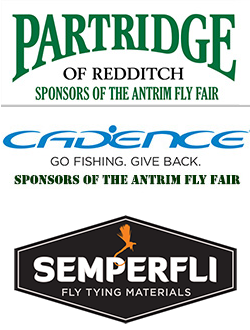